Prehistoric beasts… stalking their prey…thirsting for blood. Millions of years old but timeless. The idea of their powerful jaws clasping around flesh inspires fear in many. Despite their age, these creatures have stayed relevant. We can still see these ancient creatures roaming the earth.

Mosquitos. The scourge of the South. The pests that don’t rest. The blood-sucking bullies of the bayou. When the weather gets warm, and the air gets thick, water sits motionless in potholes, empty paint cans, and sewage drains; they lurk. Levitating above the sour mud, quietly humming a tune that foretells pain and danger.

Mosquitos are millions of years old. They outlived the dinosaurs. They are not simply bugs. They’re beasts. They are the most dangerous animal in the world.

Millions of years of feasting on every living mammal in sight, mosquitos have had a reign of terror over the Earth. They spread 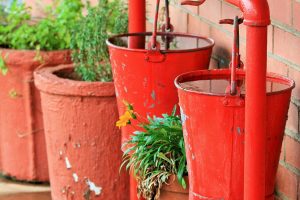 There is only one way to stop these prehistoric beasts.

infection and disease everywhere they go. And no matter what natural disasters we face, mosquitos live through them.

In prehistoric times, the only way to get rid of mosquitos was with the palm of your hand. Then people learned that certain plants could somewhat deter the pests. But they kept coming back. They always found a way back.

Once humans started to understand the link between mosquitos and disease, they began developing spray and powder pesticides. It wouldn’t be long before DDT was being used to decrease the risk of malaria.

However, due to DDT’s toxic nature, it ended up doing more harm than good. Mosquitos kept winning and humans kept losing. After several decades, we developed bug spray, traps, and bug zappers. While these are somewhat effective, they are not ideal.

Bug spray leaves your skin sticky and smelly. Likewise, mosquito traps are only somewhat effective. Plus, anyone who has used a light zapper knows that the pool of dead bugs that lies below is pretty gross.

These work as a short-term solution. But, mosquitos still roam the Earth, threatening to take over at any moment. The human race has worked tirelessly, dedicating their years to research and testing to find a way to deter these dangerous animals.

Texan Mosquito Systems has good news. We are here to share that after millions of years, we have finally cracked the code. With our modern technology, we have found the newest and most effective solution for getting rid of mosquitos for years to come.

A mosquito misting system is the best defense against these prehistoric pests. Our systems are installed discreetly around the perimeter of your yard and guaranteed to get rid of mosquitos. We have reached the end of the search for the perfect solution! Call Texan Mosquito Systems today!